See Riaan WAS the co-founder of the South African Satanic Church.  Did you notice the emphasis on a certain word, was?  Riaan released a video on July 4th and through his tears, he professed faith in Christ.  This man who worshiped the evil one went from death into life and became a child of God.  He swore there was no God, swore Jesus was fake, despised Christians for what they believe and yet he now stands justified on Judgement Day.  How? How in the world could this man become a Christian?  I mean God is a God of justice right?  Surely He would despise this man for all the horrible things he said and for denying that God even existed.  Yes, our God is a God of justice and righteousness, but our God is also a God of grace, mercy, and love.  God’s grace is open to anyone who repents from their sins and recognizes that Christ came to save them. 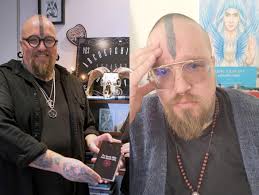 So how did it happen? Did Riaan accidently walk into a church or did he pick up a track?  No. Did he meet someone who gave him a Bible? No.  Did he meet someone who told him that God had a wonderful plan for his life? Again, no.  See, Riaan said that when he joined the satanic church that he was in a horrible spot in his life. He said “I got involved with Satanism because at the time it resonated with me, being very broken and sad without realizing it. I think the reason a lot of people resonate with Satanism is they come from a very broken place. I have met thousands of Satanists over the last three years and I’m not saying the intentions are bad, they are extremely broken and extremely hurt … that’s the one thing we all have in common.”  Riaan conducted an interview at a radio station in mid May. After the interview, a lady came up to him and hugged him. He said she hugged him in a way that he had never been hugged before.  Something was different about her, and after he looked her up on social media, he realized she was a follower of Christ.  He said a while later, he was performing a satanic ritual when he said Jesus appeared to him.  He didn’t believe it and said that if you’re real prove it.  He said the same feeling of love and mercy came over him and he broke down.

This unknown woman gave someone who most Christians would consider a monster, a simple hug.  She showed the love of God to someone who most would think is unlovable and it changed his world.  NO ONE is too far gone for God to reach.  NO ONE is unable to have a changed heart.  Paul said in 1 Timothy 1:15 “The saying is trustworthy and deserving of full acceptance, that Christ Jesus came into the world to save sinners, of who I am the foremost.” In other words, Paul said Christ came to save sinners and I’m the worst. I’m the worst of all the sinners, no one sins worse than me.  Paul… The author of many of the letters to the churches, who went around establishing churches and helped spread Christianity to the world, said he was the worst sinner ever.  I honestly believe Paul was wrong.  He wrote this not knowing me.  I know that I’m the worse sinner. If God, full of grace and mercy, can save me, then He can save anyone.  Fellow Christians, never believe someone is too far gone for God to save. Never give up on someone. Don’t treat someone differently because they are a sinner, remember they are made in the image of God just like you, and just like you at one time, they are lost as lost can be.  Show them love. Show them grace. Show them mercy. Show them Jesus.

I praise God for the salvation of Riaan Swiegelaar.  Angels rejoiced, trumpets played, Heaven was elated with joy.  The same is said for each sinner who comes back home to the Father.  If you think you are too far gone for God to love you, I have good news, you’re not.  I would love to talk with you about how Jesus came to save us from our sins.  Please reach out to me by email at pastor@salembaptistky.org  You can visit us at Salem Baptist Church on Sunday mornings at 11:00 AM for our main worship service.  You can also check out our Facebook page and watch previous sermons or send me a message there.