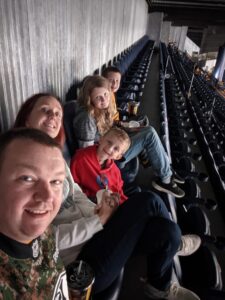 Greetings everyone!  My name is Chris Gore.  I’m the new pastor of Salem Baptist Church.  I started serving at Salem this past January, and I’m excited and honored that God’s given me the opportunity to lead the church.  I’m sure there are questions about me, so hopefully this will give you a little insight about me. My wife and I are originally from Huntsville, Alabama. Renee and I have been married since 2004.  I have three kids. My daughter’s an amazing artist and has aspirations of being a paleontologist one day. We’re a hockey family! (Go Preds!) My middle child and youngest both play hockey in Louisville.

I graduated from Madison County High School in 2004 with the full intentions of going into law enforcement when I turned 21.  After speaking with some friends at the sheriff’s department, they convinced me that at least three years of military service would be beneficial.  So in 2003 I joined the Army as a M1A1 Armor Crewman.  I did basic and advanced training at Fort Knox, Kentucky.  (Afterward graduation I said I would never come back to this place ever again. God laughed.)  After basic, I was stationed at Fort Stewart, Georgia where I did two deployments to Iraq.  After I got back from my second deployment I was placed on recruiting duty in Chattanooga, Tennessee. While on recruiting, I realized there was a little more to the Army than driving a tank and blowing stuff up so I switched to Public Affairs Broadcast Journalism, and became a television and radio news reporter for the Army, and I was stationed at Fort Bragg, North Carolina. I was medically retired from the Army in 2016.  I started working for Rick Hendrick Automotive doing digital marketing. After a year, we decided it was time to move back home, so in 2017 we moved back to Alabama. In 2019, God had a new adventure for us and it brought us back to Kentucky.

While being stationed in Chattanooga, God really smacked me in the back of the head. See I realized that I was a sinner in need of saving when I was around 10 years old at a Vacation Bible School at Winchester Road Baptist Church.  I thought that was it. I had my “golden ticket” to Heaven and I was good to go.  Over the years I began to backslide and really not live the way a Christian should be living.  I didn’t see the need to go to church anymore.  When we moved to Chattanooga, we were not at any military base so we didn’t have any real support groups anymore.  We decided that it would be a good idea to find a church just to get some kind of adult interaction.  One day coming home from work, a visitation team from New Salem Baptist Church followed me home from a four-way stop so they could find out why a soldier was in their neighborhood.  We accepted an invitation to go visit, and that’s where God showed us that there was more to being a Christian than just sitting on a church pew.  I’m happy to say that my wife accepted Christ at New Salem, and she jumped head first into children’s ministry.  I was a little hesitant to do any kind of ministry work, until a clown ministry opportunity arose.  When we left Chattanooga for North Carolina, we found looked for a church that we could plug into and that had a good children’s ministry.  God led us to a church in Spring Lake, North Carolina.  I do believe that God sent us there to learn even more, and that’s where I realized that I was being called into the ministry. More specifically youth ministry.  We moved back to North Alabama and got plugged into Harvest Baptist Church where I started volunteering with the youth.  After a good amount of searching, God called me to Immanuel Baptist Church in Elizabethtown, Kentucky.  I became the Student Pastor, and covered everything from nursery to college.  Although it was a lot of fun, I felt God calling me away from Immanuel and that’s how I ended up here at Salem Baptist Church.

Now that you know me a little better, What can you expect next? Well my goal is to do a new blog at least once a week. I’ve finally gotten into a rhythm of being a senior pastor, and my schedule is a little more clearer.  I’m also in my last year of seminary so that might play into my writing schedule as well.  But for now, my plan is to write once a week and give a bit of an insight to what new series we are starting, what the weekend sermon is going to be on, and address any random things that may come up throughout the week.  So hopefully you’ll come along and join me.